The MIND FOOD concept is so new that the full extent of its originality is not always fully appreciated!

In a few words, here is what it is all about:

And it specifically comes from:

In order to grow, survive, and function the brain, like all organs, needs the appropriate materials. To enable synthesis and renewal of cellular components, and to cover its needs in energy, the brain uses specific substances it either synthesizes or takes from the bloodstream. Certain so-called "ESSENTIAL" nutrients cannot be created by the body and must absolutely be ENTIRELY brought by food. If they are found in insufficient amounts, a deficiency will appear. The list of essential nutrients is specific to each species. The list is extensive for human beings and their brains because of their low ability to synthesize.

The originality of this new product derives naturally from new discoveries in the field of brain development, brain kinetics, and from changes in how the brain is viewed. Until recently it was often mistakenly thought to work independently of the body (body/mind).

What are these new discoveries?

The brain is not a passive organ which degenerates with advancing age. On the contrary, it is always changing and developing.

The brain's metabolism does not consist solely of sugar oxidation and the supply of energy to nerve cells. It is also responsible for:

The old ideas which thought of "body/mind" as separate and of "mind/matter" as independent have also been rejected:

b. Two points of view need to be taken into account when discussing the brain:

The latter point enables us to understand why in addition to affecting specific workings of the brain (idea association, concentration, memorization), the impact of neurotropic nutrients is felt throughout the entire body (a feeling of overall well-being, dynamism, energy). 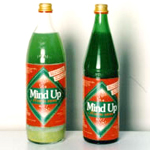 One of the specificities that makes Mind Food an exceptional concept from the commercial standpoint is that its target market is universal! All age categories are potential targets:

The biochemical formula for "Mental Drink" has been granted an international patent. Product study was complemented with organoleptic, appearance, and marketing studies. The creators are now seeking a buyer to manufacture and distribute the product in the international marketplace