As part of a doctorate on the psychology of sports, Stéphane Krsmanovic has been doing research on the levels of consciousness at the Free University of Brussels with Professor Van Fraechem-Raway since 1984. Initially specialized in the learning of complex movements using the mind, Stéphane Krsmanovic gradually moved first to techniques for increasing success in competition, then in companies.

In 1984 and 1985, he studied the effects of sensory isolation, particularly on memory, concentration and learning. He then began to work on the effects of sensory hyper-stimulation, that is, variable frequency audiovisual stimulation. He was able to draw parallels between mental capacities and data processing. These included the development of creativity, concentration, memory and understanding.

He completed the experimental phase of his doctorate in 1996 with an original experiment at the laboratory of Professor Sorel, a leading neurologist at the Catholic University of Louvain. Professor Sorel invented "neo-encephalography", a technique that detects brain potential under each electrode rather than the difference in potential between electrodes. It's thanks to this experiment that he was able to prove that "Frequency Following Response" (FFA) was unfounded.  The audiovisual stimulation protocols engrammed in the Dreamer and Mentalstim (medical version) microprocessors are, therefore, entirely original and structured according to discoveries made over 18 long years of research.

The protocols were gradually enriched with audio software which made targeted suggestions on a given theme. Over the years, the psycho-acoustic technologies developed by the medical team of Doctors and Professors specialized in psychosomatics and superlearning were refined. They are now the benchmark in the field both in Europe and internationally.

Research is currently ongoing to fine-tune even more powerful programs.

Electroencephalography has not advanced in the past twenty years. This is due to the fact that the results obtained through traditional exploration have been limited and approximate. The results obtained on brain waves are crude and provide little information. To summarize, the traditional bi-polar setup does not enable the detection of activities underlying the positioned electrodes but only detects the value of the differences in electrical potential between them… Several different electrological conditions can therefore be reflected by the same recording facet. 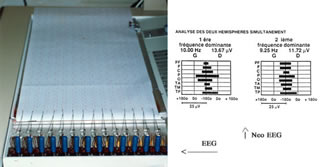 NEO-EEG has enabled EEG to provide monopolar detection for the first time. That is, the recording of the activity underlying each positioned electrode. It provides a perfectly objective view of the brain's activity.
This technique also enables the detection of dominant trace frequencies. Each frequency can be measured to within ¼ hertz and their amplitude to within 100 MCV. Their phase, spectrum and the frequency and amplitude of potential interhemispheric asymmetry can also be determined.

Thanks to this new technique Mr. Krsmanovic, working with Psychomed.com, has now set off on a new research path. This explains the effectiveness of the latest generations of altered state of consciousness induction protocols.